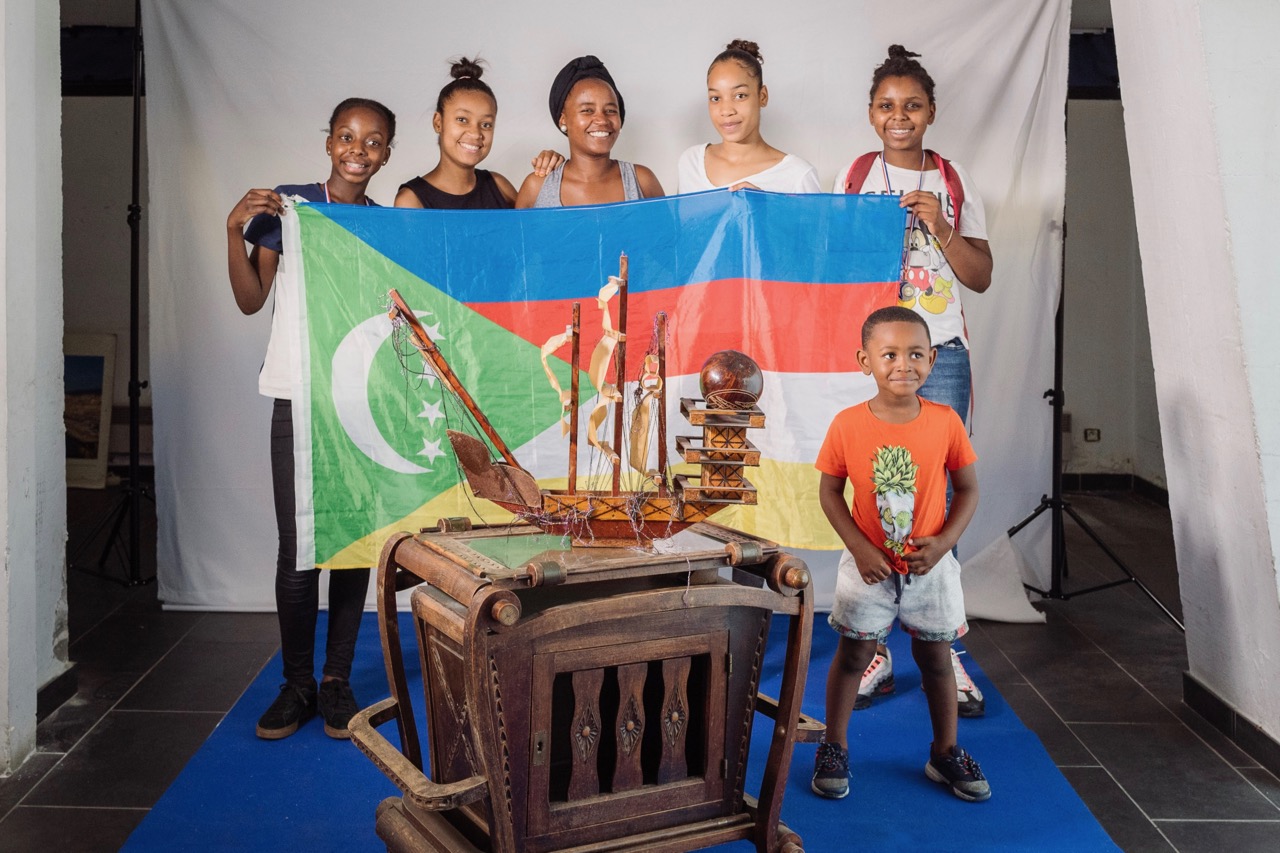 Neighbours ‘trapped’ in photography studio together

In late June – early July 2018 Paweł Ogrodzki together with Aziz Boumediene opened a communal photo studio in the restroom of the Bel Horizon block of flats in Marseille. In the field note of 4 July Ogrodzki describes his idea as follows:

Imagine a photo studio as a meeting point for people who do not know each other. Maybe they pass each other every day but haven’t had any reason to meet yet. Now they can by posing together for their portrait. In their best suit or dressed casually. With a specially selected object, a family memento or a vase hastily grabbed off the table. All this effort only to be together in a picture, to look together in one and the same lens. What is more, a lens held by a foreigner who does not speak their language. Like many of those who have arrived in France recently and live their new, complex migrant – French identity.

It is true that Bel Horizon is inhabited mainly by foreign families: “The Cape Verde Islands, Comoros, Majotta, Algeria, Morocco”, Ogrodzki lists in his field note of 1 July. Adding: “The tenants’ turnover is relatively quick; they don’t strike roots here. Our activity is a bit like approximating a glass in order to focus rays and start a small fire in the community relations.” The artists invite Bel Horizon residents to have their photo taken together with their neighbours. However, in order to avoid shooting only people who know each other, they make appointments for different neighbours to arrive at the same time. It turns out that usually the studio welcomes people who had never had any contact before, except for the exchange of polite greetings. Because it takes a while to prepare for the photo shoot, the neighbours start talking to each other. The artists also ask them to bring along objects that are important to them. Stories behind those objects allow them to get to know each other's biographies better and learn about the experience of the members of this multiethnical community in Bel Horizon. In his summary of the activity Ogrodzki notices that “operation of the photographic studio was a sort of artistic trap [...] where people who decided to take the photo with their neighbours would fall. These [...] efforts put them in a situation of an encounter, of a talk and a shared portrait with people whom they have previously looked at with reluctance.”

The “trap” category was taken by the researcher from the works of the British anthropologist, Alfred Gell. The co-author of this paper in her paper written with Tomasz Rakowski and Ewa Rossal, explains this notion and its links with art:

The figure of the trap turns out to be [...] useful in interpretation of artistic projects, creating new ethnographic situations. […] Gell believes that all contemporary artwork works the same as traps. They generate questions but they do not provide answers, they provoke to trigger reaction in the audience, they create situations where not only the viewer, but often the artist himself or herself is entrapped in a network of meanings and relations between themselves and between them and the object. Traps not only tend to embody complex ideas and intentions of the artist, but also  disclose traits of the potential recipient, since, as emphasized by Gell, »The trap is therefore both a model of its creator, the hunter, and a model of its victim, the prey animal. But more than this, the trap embodies a scenario, which is the dramatic nexus that binds these two protagonists together, and which aligns them in time and space«. On the linguistic level we can study traps as tools/ devices/ objects for catching and/or as a method or activity aimed at entrapping somebody in a more or less defined situation.

The photographic studio is a regular piece of infrastructure. In Marseille it became a solidarity trap.