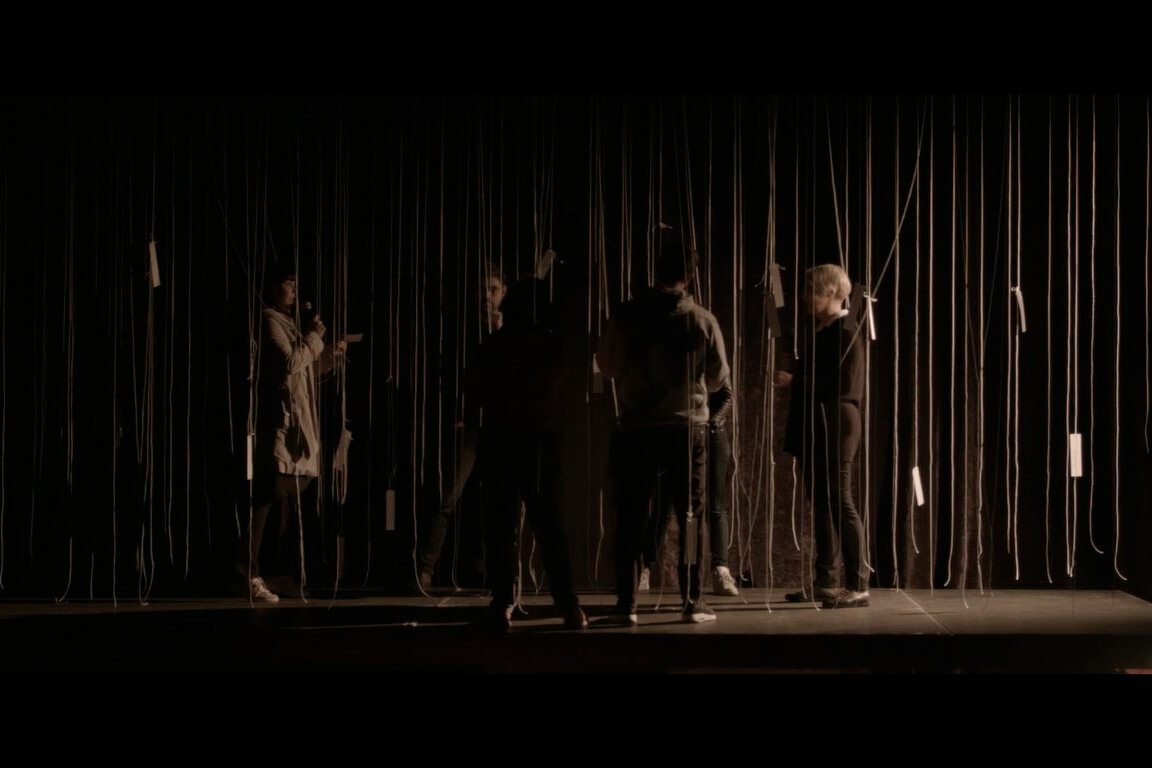 On the 4th October 2018 Karolina Pluta, a researcher and an artist invited employees of Zagreb POGON to an activity called The Confession Room. On the video shot by Nina Klarić we see a room with a square stage in the middle and ribbons hanging down from the ceiling, forming a sort of openwork cube. At one side of the stage there is a chair where individuals sit one by one. Each person is induced into a meditative state where they can focus on their body and feelings evoked thereby, and then they are asked to note on a piece of paper a question or questions they have always wanted to ask their colleagues from POGON, but never had a chance. The notes are then hanged on ribbons. During this activity seven people phrase the total of couple of dozens of questions.

At the end of the day they meet again in the performance space in order to read the questions and discuss them. First thing one notices is the laughs, jokes, but also a hint of ambivalence. The atmosphere is very relaxed, however, the personal topics they touch give rise to a subtle tension. At first sight it seems that the activity failed. Instead of creating deep empathy, encouraging people to serious being-with, it provokes amusement. The participants seem to be looking for ways to somehow deal with the awkwardness of the situation, to somehow distance themselves from it and find the funniest answer to the given question. Most of them really succeed. When to our question: “What do you fear most?” they answer “Deadlines”, the participants of the event seem to be most amused. Later other, some really personal, and some trivial questions appear still provoking most unusual replies. Paradoxically it is the laughter that unites them. Those who follow the situation on the video record immediately notice the magic of the relations between the POGON employees who, during their thunderous explosions of joy, drop their masks. In our working language we like to call such moments “solidarity cracks”, the moments when people expose themselves and open up to real close encounters.

The laughter does not discredit the authenticity. On the contrary, it helps bring people together, intertwines somehow those who work together, share similar professional worries and work-related tensions, however, they are different from one another: in their attitudes, kinds of life challenges, commitments, character, mindset, opinions.  In laughter these differences become irrelevant for a moment, people meet, and briefly, though authentically unite. How is it possible that a simple formula allows for this kind of experience?